Question: How many electoral votes were up for grabs in the first presidential election in 1789?
Answer: Sixty-nine electoral votes were available in the 1789 presidential election. George Washington ran unopposed and won all 69 votes. The first election since the ratification of the U.S. Constitution in 1788 had only 10 states cast electoral votes. New York’s state legislature did not choose electors in time for them to cast votes, and North Carolina and Rhode Island had not yet ratified the Constitution. Congress counted and certified the electoral vote count on April 6. At that time each elector had two votes, and the candidate who received the second most votes was elected as vice president. John Adams was elected the first vice president with 34 electoral votes.

Question: What was the narrowest popular vote margin by which a presidential candidate won a state?
Answer: In the 1832 presidential election, U.S. Sen. Henry Clay (National Republican) carried Maryland by a margin of 4 votes over incumbent Andrew Jackson (Democrat). From 1824, when the popular vote was first recorded, through 2016, there were 62 cases where a state was carried by a margin of 1,000 votes or fewer, including 4 cases where the margin was less than 100 votes.

Question: Which presidential election featured the largest popular vote margin by a winning candidate?
Answer: In the 1920 presidential election, U.S. Sen. Warren Harding (Republican) defeated Ohio Gov. James Cox (Democrat) by a margin of 26.23 percent in the national popular vote, the largest margin since the vote was first recorded in 1824. The second largest margin occurred in the 1924 presidential election. That year incumbent Calvin Coolidge (Republican), who had taken office following Harding's death in 1923, defeated former ambassador to the United Kingdom John W. Davis (Democrat) by a margin of just over 25 percent.

Question: Which presidential election had the highest estimated voter turnout?
Answer: In the presidential election of 1876, an estimated 82.6 percent of the voting-eligible population cast ballots, the highest estimated turnout figure in U.S. history. That year Gov. Rutherford B. Hayes of Ohio (Republican) defeated Gov. Samuel Tilden of New York (Democrat) to win the presidency. The results of the election were not immediately clear, however, with both parties claiming victory in Louisiana, Florida, and South Carolina. The dispute was resolved in the Compromise of 1877, under which Hayes won the presidency in exchange for withdrawing federal troops from Southern states, bringing an end to the Reconstruction period.

Question: Which presidential election featured the smallest margin in the popular vote?
Answer: The presidential election with the smallest margin in the popular vote occurred in 1880. That year James Garfield (Republican) defeated Winfield Scott Hancock (Democrat) by a margin of 214 to 155 in the electoral college. In the popular vote, Garfield’s margin over Hancock was 0.09 percent. Out of the 38 states at the time of the election, 6 were decided by margins of 2 percent or less, giving Hancock 5 of California's 6 electoral college votes and all of New Jersey’s 9 votes and Garfield a combined 59 votes from Indiana, Oregon, New York, and Connecticut. The 1880 election was also among the top five in recorded voter turnout with an 80.5 percent turnout rate among the voting-eligible population.

Question: Hillary Clinton received 65.8 million popular votes in 2016. How many votes were cast for John Kerry during his loss in 2004?
Answer: In the 2004 presidential election, John Kerry received 59.0 million votes but lost to Republican incumbent George W. Bush. 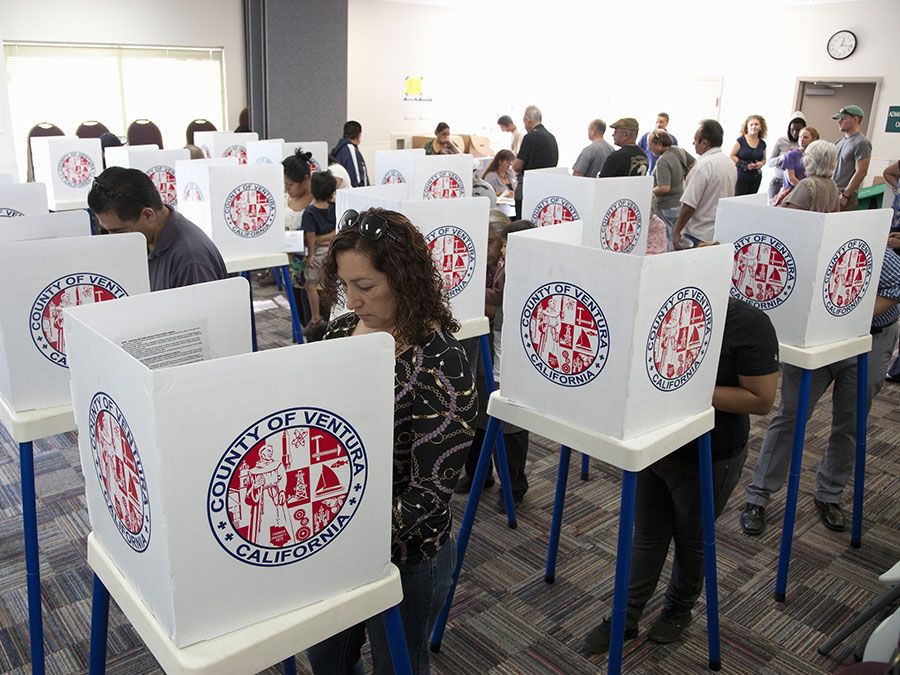 Voting for the U.S. President

Test your knowledge of how voters voted in U.S. presidential elections across history. Quiz content provided by Ballotpedia, the Encyclopedia of American Politics.

Technology
Tech Companies
Browse All Quizzes
Your results
Question Question {{($index + 1)}}
Your Answer:
{{vm.state.responses[$index].isCorrect ? 'Your' : ''}} Correct Answer:
Are you a quizmaster?
Share Your Score:
Facebook Twitter
Compare your score
Max Score: {{vm.maxPoints}}
New Best Score!
{{vm.state.score|number:0}}
{{vm.communityAverage|number:0}}
Your Score
Community Average
High scores
Login or Join to track your quiz stats, save your best scores, and compete with the community!
Your preference has been recorded
Step back in time with Britannica's First Edition!