Question: Which philosopher is best known for his statement cogito ergo sum?
Answer: After a series of meditations in which he finds rationale to doubt everything he once thought he knew, Descartes comes to the conclusion that, because he is thinking, he must exist, as something must be doing the thinking. Cogito ergo sum, then, translates to I think, therefore I am.

Question: According to Plato, what is knowledge?
Answer: Plato concludes that a belief can only be considered knowledge if it is justified and true. For example, if you believe the fastest way home is by highway because you’ve tested it and it’s true, that’s knowledge. If it isn’t true or you haven’t tested it (i.e., no justification), then it isn’t knowledge.

Question: Which branch of philosophy is primarily concerned with the question of being?
Answer: Existentialism deals with the problem of being. It argues that the main struggle faced by all is that of existence, which therefore should be studied and questioned as much as possible.

Question: What does tabula rasa mean?
Answer: Tabula rasa is Latin for clean slate. It refers to the idea that the mind is empty of knowledge upon birth. The term was coined by John Locke.

Question: Who wrote The Last Messiah?
Answer: The Last Messiah, written by Peter Wessel Zapffe, argues that the existential angst suffered by humanity is a product of our self-awareness and intellect.

Question: Descartes’s meditation that led him to conclude that perhaps even mathematical laws are not true is referred to as…
Answer: Descartes, while attempting to wipe his mind of everything but true knowledge, utilized what he called the evil demon (or genius) argument. This argument was specifically aimed to protest laws of math and science, and in it Descartes stated that perhaps he only believed things like 2 + 2 = 4 because an evil demon was causing him to do so.

Question: The allegory of the cave argues what?
Answer: Plato’s allegory of the cave involves three prisoners who are tied to rocks and forcibly positioned so that all they can see are shadows of people on the stone wall ahead of them. Since all they’ve ever experienced are these shadows, the prisoners consider them to be “real” objects. Eventually one of the prisoners escapes and realizes that the shadows were not real but shadows of people who had been walking behind them the entire time. Plato’s argument here is that though perceptions may seem to be accurate, they can be misleading as we may not know the context surrounding them.

Question: Epistemology is the theory of…
Answer: What do we know when we know? Can we know anything? What is truth? These are the types of questions asked in epistemology.

Question: Plato was a student to which philosopher?
Answer: Plato studied under Socrates and taught Aristotle.

Question: Jean-Jacques Rousseau is known for what?
Answer: The Social Contract was considered revolutionary for its argument that the monarchs of Europe were not divinely justified in their rule. Rousseau continued by claiming that the people were the ones entitled to govern. He became well known for this as well as for his publication Discourse on Inequality, which also highlighted the problems faced by society and politics.

Question: What is the philosophical study of value called?
Answer: Axiology can be seen as a combination of ethics and aesthetics. It studies the foundational implications of worth, which helps to enrich other branches of philosophy.

Question: Which branch of philosophy deals with the question of beauty?
Answer: What is beautiful? Why is it beautiful? What value do beautiful things have? These are the types of questions asked in aesthetics. 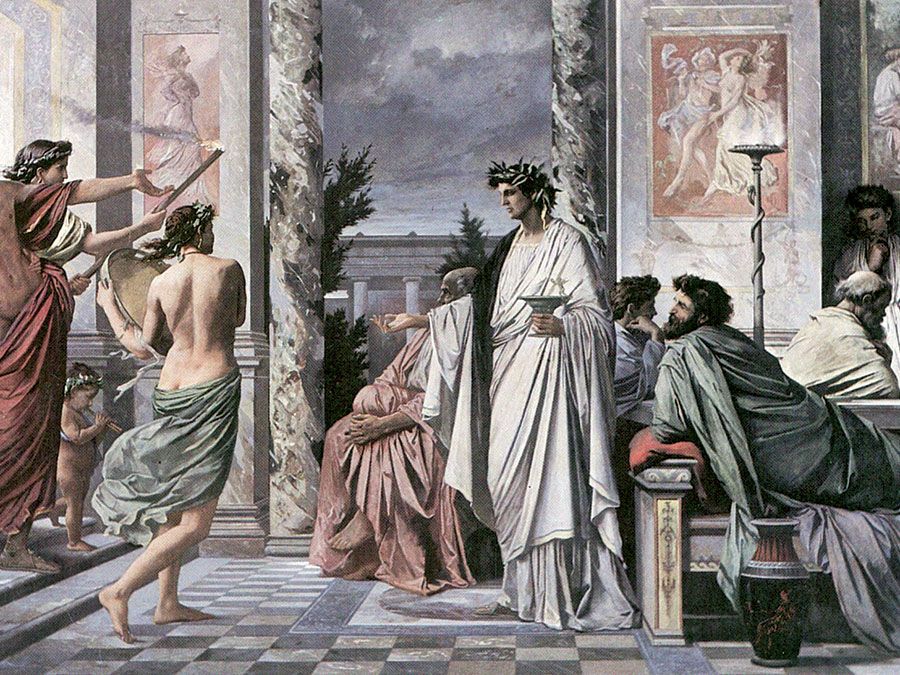 What is existentialism? Who was Socrates? What is idealism? Test your knowledge of these topics and more with this Philosophy 101 quiz!

Animals
A Little Bird Told Me

History
Henry VIII and His Wives

Society
Halloween
Browse All Quizzes
Your results
Question Question {{($index + 1)}}
Your Answer:
{{vm.state.responses[$index].isCorrect ? 'Your' : ''}} Correct Answer:
Are you a quizmaster?
Share Your Score:
Facebook Twitter
Compare your score
Max Score: {{vm.maxPoints}}
New Best Score!
{{vm.state.score|number:0}}
{{vm.communityAverage|number:0}}
Your Score
Community Average
High scores
Login or Join to track your quiz stats, save your best scores, and compete with the community!
Your preference has been recorded
Step back in time with Britannica's First Edition!