Question: Which artist painted the Mona Lisa?
Answer: Leonardo da Vinci was responsible for the world’s most famous painting, the Mona Lisa, which he began in 1503 and likely continued to work on throughout the rest of his life.

Question: Which artist sculpted the David?
Answer: Michelangelo was responsible for the world’s most famous sculpture, David, now in the Galleria dell’Accademia in Florence. He received the commission in 1501 and sculpted the figure from a used block of marble, completing it in 1504.

Question: A mural by which artist for the Palazzo Vecchio in Florence survives only in copies and preparatory sketches?
Answer: Leonardo da Vinci and Michelangelo both received a commission to paint a mural celebrating the military victories of Florence for the Palazzo Vecchio in 1503 and 1504, respectively. The commission was the only time the two artists worked together, but neither of the works was ever completed. They survive only in copies and partial preparatory sketches. From these, one can see that the murals gave testimony to the special skills of each artist: Leonardo’s Battle of Anghiari showed galloping horses, while Michelangelo’s Battle of Cascina exhibited active nudes—soldiers stop swimming and climb out of a river to answer an alarm.

Question: Which artist also wrote poetry?
Answer: Michelangelo was not only an artist but also a poet! Among some 300 preserved poems, there are about 75 finished sonnets and about 95 finished madrigals, poems of about the same length as sonnets but of a looser formal structure. Those written up to about 1545 have themes based on the tradition of Petrarch’s love poems and a philosophy based on Neoplatonism. They give expression to the theme that love helps human beings in their difficult effort to ascend to the divine.

Question: Which artist kept extensive notes on art and science using mirrored writing?
Answer: Leonardo da Vinci maintained extensive notes on, among other subjects, human anatomy, mechanics, architecture, and painting for most of his life, using a reversed handwriting that read from right to left and was best read with a mirror. He probably intended to eventually publish his writings but never got around to it. In a sentence in the margin of one of his late anatomy sketches, he implores his followers to see that his works are printed.

Question: The architectural designs of which artist can be found throughout Rome?
Answer: In his later years, Michelangelo was more involved with architecture, an area in which he did not have to do physical labor. Two monuments in Rome, the Capitoline Square and the dome of St. Peter’s Basilica, are still among the city’s most notable visual images. He did not finish either, but after his death both were continued in ways that probably did not depart much from his plans. He had previously worked on the reading room and vestibule for the Laurentian Library in Florence. Leonardo da Vinci also had a great interest in architecture, but no surviving constructions can be attributed to him.

Question: Which artist painted an iconic fresco of a biblical scene?
Answer: Both Leonardo da Vinci and Michelangelo painted frescoes depicting biblical scenes that would become iconic: Leonardo painted the Last Supper, a scene from the New Testament, probably between 1495 and 1498 for the monastery of Santa Maria delle Grazie in Milan, and Michelangelo painted the Creation of Adam as well as other scenes from the Old Testament for the Sistine Chapel in 1508-–12. Michelangelo also painted the Last Judgment, from the New Testament, for the end wall of the Sistine Chapel in 1536-–41.

Question: Which artist toiled away at an equestrian sculpture that was never completed?
Answer: Michelangelo is famed for his sculptures, many of which remain unfinished, but Leonardo da Vinci also tried his hand at the medium. He may have devoted 10 years or more—with interruptions—to an equestrian statue in bronze to honor Francesco Sforza, the father of Leonardo’s early patron, Ludovico Sforza, duke of Milan. Although the clay model of the horse was put on public display in 1493 and preparations were made to cast the colossal figure, war prevented it from being cast, and the model was eventually destroyed. No surviving sculptures have been unequivocally attributed to Leonardo.

Question: Which artist died in France?
Answer: Leonardo da Vinci died in the small residence of Cloux (later called Clos-Lucé) in France at the age of 67 in 1519. He had accepted the invitation of the young king Francis I to enter his service three years prior. Michelangelo, on the other hand, died in Rome in 1564 at the age of 88. 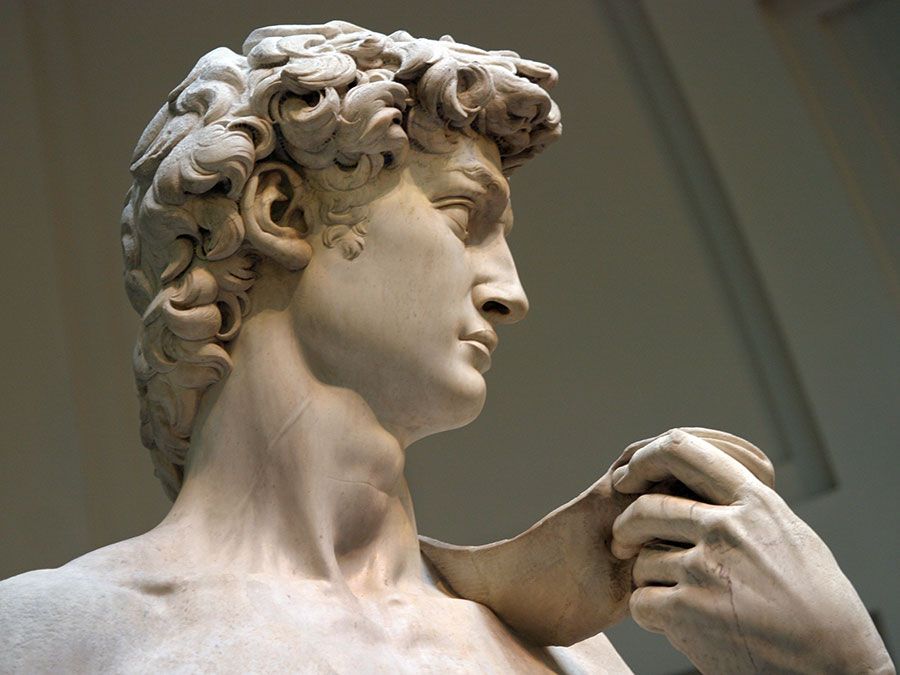 It’s hard to say who was better, Leonardo da Vinci or Michelangelo. It might be even harder to remember which one did what. Both were Renaissance artists with unbounded ambition and skill. Can you keep the two straight?

Sports & Recreation
I Am the Greatest (Athlete)

Philosophy & Religion
Buddha and Buddhism
Browse All Quizzes
Your results
Question Question {{($index + 1)}}
Your Answer:
{{vm.state.responses[$index].isCorrect ? 'Your' : ''}} Correct Answer:
Are you a quizmaster?
Share Your Score:
Facebook Twitter
Compare your score
Max Score: {{vm.maxPoints}}
New Best Score!
{{vm.state.score|number:0}}
{{vm.communityAverage|number:0}}
Your Score
Community Average
High scores
Login or Join to track your quiz stats, save your best scores, and compete with the community!
Your preference has been recorded
Step back in time with Britannica's First Edition!