Question: Which Egyptian god was often represented as a falcon, or as a man with the head of a falcon?
Answer: Horus, a sky god, was the son of the goddess Isis and the god Osiris.

Question: Which evil snake god gave his name in 2005 to an asteroid that was briefly believed to be on a possible collision course with Earth?
Answer: Apophis, the god of chaos, was the enemy of the sun god Re. The asteroid 99942 Apophis, discovered in 2004, was ultimately determined to pose no threat to Earth.

Question: Which Egyptian god—known as the god of storms and the desert—was usually represented as an animal whose species has not been identified by modern Egyptologists and zoologists?
Answer: Seth was represented with a dog-like body, squared ears, a tufted tail, and a long snout. A number of real animals—such as the aardvark, fennec fox, jackal, and okapi—have been suggested as the basis for his form, but it is also possible that the animal is a mythical composite.

Question: Which god is credited with inventing writing?
Answer: Thoth, the god of learning, was depicted as a man with the head of an ibis.

Question: What is the goggle-eyed, bowlegged, dwarf god Bes known for doing?
Answer: His unusual appearance was believed to drive away evil spirits.

Question: Which goddess was probably first worshipped as a lioness or a wild cat but was represented as a domestic cat after domestic cats were introduced into Egypt about 2000 BCE?
Answer: Bastet is often represented carrying an ancient percussion instrument called the sistrum.

Question: Which god is typically represented as a mummy?
Answer: Egyptian myth says that Osiris was the king of Egypt until he was murdered by his brother Seth. He was resurrected by his wife Isis and became the god of the dead.

Question: During the Amarna period (c. 1353–36 BCE) which god was elevated above all other gods?
Answer: King Amenhotep IV took the name Akhenaten and made drastic changes to the official Egyptian religion, including establishing a new cult dedicated to the Aton, the sun’s disk. The changes were reversed soon after Akhenaten’s rule ended. 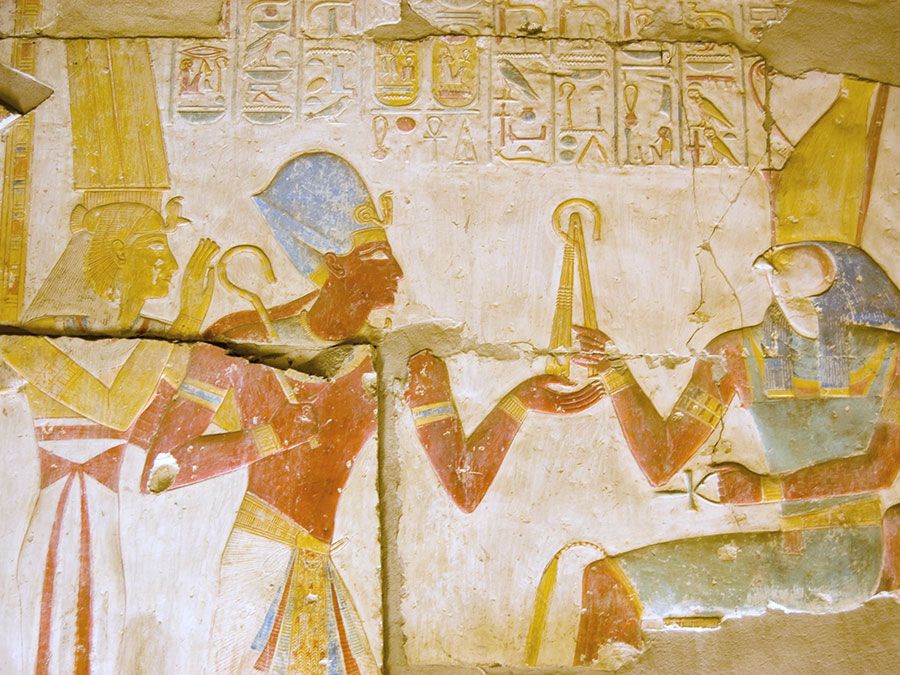 Ancient Egypt had a huge pantheon of gods and goddesses. How many of them do you know?

Music
An Evening at the Opera

Health & Medicine
Characteristics of the Human Body
Browse All Quizzes
Your results
Question Question {{($index + 1)}}
Your Answer:
{{vm.state.responses[$index].isCorrect ? 'Your' : ''}} Correct Answer:
Are you a quizmaster?
Share Your Score:
Facebook Twitter
Compare your score
Max Score: {{vm.maxPoints}}
New Best Score!
{{vm.state.score|number:0}}
{{vm.communityAverage|number:0}}
Your Score
Community Average
High scores
Login or Join to track your quiz stats, save your best scores, and compete with the community!
Your preference has been recorded
Step back in time with Britannica's First Edition!