You are using an outdated browser. Please upgrade your browser to improve your experience and security.
Samora Machel
president of Mozambique
Media
Print
Thank you for your feedback

president of Mozambique
Written By:

Born more than 200 miles north of Maputo, the capital of Mozambique, Machel received his education through mission schools. He refused to enter a seminary for higher education and instead became a nurse in Maputo. The experience radicalized him, and, after 10 years in the profession, he joined the clandestine Mozambique Liberation Front (Frelimo), which sent him to Algeria for military training. He rose quickly through the leadership ranks and became Frelimo’s leader in 1970, after the 1969 assassination of Eduardo Mondlane.

Machel claimed that his radical political stance came originally not from reading Marx but from the experiences of his family; his parents were forced to grow cotton for the Portuguese and were displaced from their land in the 1950s in favour of Portuguese settlers. After Mozambique became independent in 1975, Machel became president. Frelimo followed Marxist ideology by nationalizing many institutions and supported Robert Mugabe in his fight to end white domination of his country, Zimbabwe. Machel, however, did sign the Nkomati Accord with South Africa in 1984, under which each country agreed not to support the other country’s opposition movements, and thereby maintained an economic relationship with the white minority government battling the African National Congress. His charisma and personal style kept his government in power despite the droughts and floods of the early 1980s and the ongoing civil war with the Mozambique National Resistance (Renamo).

Get exclusive access to content from our 1768 First Edition with your subscription. Subscribe today
This article was most recently revised and updated by Amy Tikkanen, Corrections Manager. 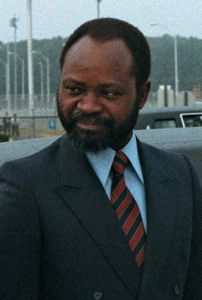